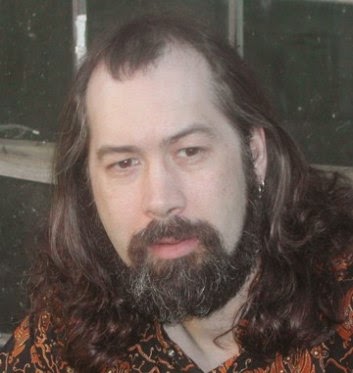 It is our great pleasure to introduce you to J. S. Daly and his work to be included in Dark Heart Volume 2, 'Chestnut Tea'.

'Chestnut Tea' is a really dark and spooky tale, with an eerie supernatural flavour. Here's a little teaser.

"His comment met silence.  Every few years strange things happened in Flint Hill.  Kids found squirrel pelts with the bones missing, mass migrations of frogs carpeted the roadways, scores of dead fish floated in the lake, and once, about five years ago, a boy named Dutch had disappeared."

Welcome, J.S.Daly, tell us a little about yourself.
I live in upstate New York near Lake Ontario, and grew up far from the city exploring the woods along the Erie Canal, camping out in abandoned structures, and scaling the walls of the old chapel at the back of the local cemetery.  I originally went to school to be a museum curator because I love the sense of mystery that goes along with historic sites and ancient relics, though I currently manage computer networks!  I have a passion for old time radio shows like The Inner Sanctum, and dark fiction written for younger audiences.

When did you start writing ‘seriously’?
One night, while working at Mystic Seaport, a historic shipyard and museum in Connecticut, the idea for an adventure about tall ships came to me.   I was in my late twenties when, on the deck of an aged whaling vessel, I outlined my first novel.  I haven’t let go of writing since.

What is the favorite thing you have ever written?  Tell us a little about it.
When I was in high school, I wrote a series of lengthy poems about a character called “The Caretaker,” a gravedigger who lived in a cemetery and had supernatural adventures, which I only shared with a few friends.  I had a lot of fun with it, and the response I got encouraged me to keep writing and let my imagination go.

Who is your inspiration?
I found myself drawn to haunted houses at a young age thanks to John Bellairs and got lost in the October Country with Ray Bradbury.  More recently, I have admired the frightening imagery of witches in Joseph Delaney’s work, the archaeological mystery of R.L. LaFevers, and the sheer urban darkness of F.E. Higgins.

What are your hopes and ambitions for the future?
I hope to inspire a generation of kids who like to explore the dark.  I want to open up horror to the pre-teen audience as much as it has been for young adults.  When parents ask whether that’s really appropriate, they are associating the word “horror” with violent movies rather than the spooky dark fantasy that is already a component of many middle-grade novels.  I’m hoping to change that reaction so that when someone hears the words “children’s horror,” it evokes images of camp-fire stories and Halloween.

What would be your advice to aspiring writers?
It is important to always help other writers.  By critiquing material that isn’t your own, you can get a feel for what works and what doesn’t and then apply it to your own voice.  Keep that idea notebook full because you never know when the parts of a story will fall into place.

Tell us a secret.
I keep a collection of bones in my cellar. No, really.  I do a lot of hiking and run into all sorts of deceased animals on the trail.  Their remains make excellent witch bottles, frames and sculptures.

J. Sean Daly is an emerging children’s horror writer who lives in Rochester, New York and writes about scary books for kids on his website:  Awake at Midnight.  He holds a Degree in Cultural Anthropology from Rutgers University, and was heavily influenced by the dark fantasy of John Bellairs and Phyllis Reynolds Naylor at a young age.  His current influences include Joseph Delaney and Rick Yancey.

Sean spends his free time exploring and photographing abandoned, decaying structures and adventuring with his family and a GPS.  He can often be found writing in old, worn notebooks at local cemeteries.  He finds additional inspiration for his writing in Old Time Radio shows and he maintains a collection of antique photographs that help to inspire his characters.

Some of his strongest early memories are of ghostly noises from the graveyard across the street from the home where he grew up and getting lost in a ruined house in Dansville, NY that was surrounded by wilderness.  It had been gutted by fire, though an iron spiral-staircase remained.  He ran away rather than climbing it, and to this day wonders what might have been at the top.

Sean’s intention is to legitimize a new niche of literature designed to not only frighten the wits out of children, but also to engage them in self-discovery and depict a framework for empowerment.

You can join the discourse at:
Blog:  http://www.awakeatmidnight.com
Twitter:  https://twitter.com/Awake_Midnight
Facebook:  https://www.facebook.com/j.sean.daly
Posted by katie M John at 02:11