Introducing you to ... Linda Foster

Welcome to our fifth post introducing you to the 'Dark Heart' authors. Today it is our great pleasure to introduce you to Linda Foster, author of the Young Adult novel,  'Soul Bound' which will be available from May 2013.

Linda's story 'Condemned' is a spooky little tale, sure to get you looking nervously over your shoulder.

Ash and Grace are brother and sister and their bond runs deep. Different in almost every way, they share a deep sense of love and affection for one another. So when one of them is seriously injured, the other will do anything to save them; even if it means condemning themselves to an eternity of sorrow.

With a creepy sense that fate will track you down, the story unfolds to show you that there is no love without sacrifice and no choice without consequence.

"Ash scooped Grace off the couch, set her on her feet, and carved his way through the crowd, holding her hand tightly for fear that she might be snatched away from him at any moment. He registered the looks from some of the other guests, and knew that they’d be talking about them leaving so early, but none of that mattered now. All that mattered was that he needed to get Grace out of there. Now that they were leaving, the pressure that had been building in his head became worse. They had to get out of the house before that guy found them, or something bad was going to happen; he was sure of it."

Linda Foster was born and raised in Colorado, where she still lives with her (very patient) husband and four (very spoiled) ferrets. Linda has always been an avid reader, from the very first moment she picked up her first book. Her book addiction has grown steadily worse.
She started writing short novellas for her friends in middle school and expanded into full-length novels several years later. Soul Bound, due for release in May 2013 by Glass House Press is her first published novel. 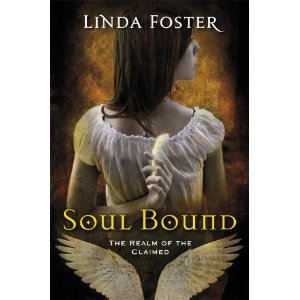 Soul Bound: Soul Bound is due for release in May 2013 and is published by Glass House Press. It is available for pre-order in paperback or e-book at Amazon and Barnes & Noble.

Ash was just another high school student, intent on living life to the fullest, winning his next lacrosse game and making it to this weekend's party in time.

Until he is forced to sell his soul to a demon to save his sister's life, and finds himself falling in love with one of the original fallen angels. Talk about everything falling apart int he blink of an eye. Now he's part of that fallen angel's desperate fight for freedom, and an irreplaceable cog in an angel revolution that could lead to salvation ... or the end of the world.

Join Ash as he races through new worlds and a terrifying cast of characters in pursuit of freedom, his soul and the most important thing he's ever lost - true love.